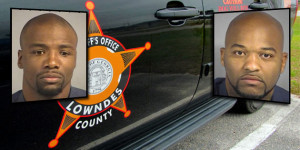 VALDOSTA, GA – Two men have been arrested for trafficking cocaine in Valdosta and Lake Park.

Anthony Antwain Ceasar, 32, of Valdosta, and Kenneth Bernard Johnson, 38, of Lake Park, were arrested and taken to the Lowndes County Jail. Ceasar and Johnson are being charged with trafficking cocaine, possession/distibution of a controlled substance within 1,000′ of a public housing area, and possession of tools for the commission of a crime.

These arrests were the culmination of several months’ investigation into Kenneth Johnson’s involvement in the movement and distribution of multiple kilograms of cocaine in Lowndes County and the surrounding area.

Investigators are continuing to investigate these persons and additional arrest may be possible. Sheriff Prine is asking that anyone with information on this case, or any other case to contact the Lowndes County Sheriff’s Office at {229} 671-2950 or anonymous tips can be provided at {229} 671-2985 or on line at www.lowndessheriff.com.