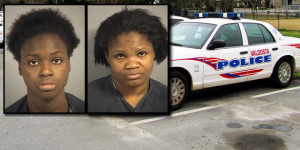 VALDOSTA, GA – The Valdosta Police Department arrested two women in connection with a robbery over the weekend.

According to police, on Sunday at approximately 7:40 am, two women entered the Flash Foods at 511 North St. Augustine Road with their faces covered, threatened the clerk, and demanded money. The suspects initially left the area on foot and got into a vehicle which was spotted by a VPD officer right after the robbery took place.

The officer attempted to pull the vehicle over, but they failed to stop leading to a pursuit. The suspects fled the area and ended up crashing their vehicle into a fence at the intersection of Jaycee Shack Road and Northside Drive. They then attempted to flee into a wooded area, but were soon apprehended near the accident.

The Lowndes County Sheriff’s Department and Remerton Police Department assisted VPD in apprehending the two suspects. Evidence of the robbery was recovered and the two suspects were identified as Lakesha Stewart, 39 year old Valdosta resident who was charged with robbery, obstruction of an officer and multiple traffic offenses and Lamarion Baker, 17 year old Valdosta resident who is charged with robbery and obstruction of an officer. There were no injuries reported.

Chief Brian Childress said, “this was a tremendous team effort by the Valdosta Police Department, Lowndes County Sheriff’s Department, and Remerton Police Department. No one was hurt during the incident which says a lot about the officers and deputies involved”.