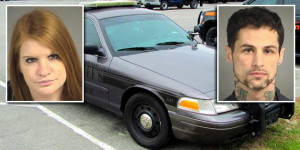 On Tuesday evening, Lowndes County Sheriff’s Office received information from the Thomas County Narcotics Unit that Cleveland Eugene Watson, 28, of Thomasville, was staying at the Briarwood Motel and had active arrest warrants issued in Thomas County. Deputies went to the motel and spoke with the persons in the room who denied Watson was in the room. With permission, the deputies entered the room and found Amanda Lee McKinney, 26, of Thomasville, and a fourteen year old juvenile hiding in the bathroom, and Watson was found hiding under a bed. During the search, deputies also found a quantity of Ecstasy in the toilet that someone had attempted to flush.

The Ecstasy was recovered and weighed approximately 17 grams and has a street value of around $340.

Following an investigation by the deputies, Amanda McKinney and Cleveland Watson were arrested and taken to the Lowndes County Jail and booked on possession of Ecstasy charges. The juvenile was also arrested and was transported to the Regional Youth Detention Center in Thomasville pending an appearance in Juvenile Court. The other persons in the room were determined not to be connected to the narcotics and were released.

Sheriff Prine is asking that anyone with information on this case, or any other case to contact the Lowndes County Sheriff’s Office at {229} 671-2950 or anonymous tips can be provided at {229} 671-2985 or on line at www.lowndessheriff.com.