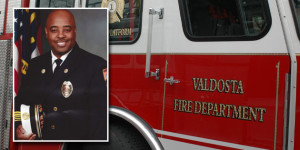 VALDOSTA, GA – The City of Valdosta announced today that Freddie Broome, currently the Assistant Fire Chief for the city of Winston Salem, N.C., has been named Fire Chief of the Valdosta Fire Department.

In naming Broome as the new Fire Chief, City Manager Larry Hanson said the city conducted a national search to find the best professional to lead the VFD into the future.  Interest was very high in this position due to the outstanding reputation of Chief J.D. Rice, as well as the outstanding work and reputation of the men and women who serve the department and this community.  As a result, the city received nearly 60 applications from 20 states across the country.

“The city utilized an outside agency—the Carl Vinson Institute of Government—to assist in the selection process, which included application review and the compilation of a short list of the most qualified candidates,” said Hanson, who went through a similar process to arrive at the final list of candidates to be interviewed.  “The CVIOG then selected a panel of six highly respected Fire Chiefs from Georgia and Florida to conduct an assessment and evaluation of the highest rated candidates.  The Fire Chiefs came to Valdosta and put the candidates through an assessment utilizing various exercises.  They evaluated and scored the candidates on their perception, judgment, decisiveness, oral communication, written communication, leadership and organizational planning.”

Hanson also interviewed the candidates a second time during the daylong process.

“Upon the completion of the assessment and interview process, it was determined that Chief Broome scored the highest of all candidates.  The assessment panel members were unanimous in their recommendation of him as the highest rated candidate,” said Hanson.  “I have no doubt that Chief Broome is the right professional to lead the men and women of the VFD and to serve the citizens of our great city.”

According to Hanson, the feedback he received from the six Fire Chiefs on the panel, various references, and others who either know or have worked with and for Chief Broome were highly supportive of him.

References, co-workers and supervisors all describe Chief Broome as an impressive individual who is calm under pressure, team oriented, honest and dependable, an effective listener, trustworthy, someone employees want to work for, impeccable personal and professional ethics, with an inclusive and participatory management style.

“Chief Broome will build upon the strong foundation that Chief Rice and his team has built, and I know the dedicated professionals in our VFD will welcome him and together take the department to new heights,” said Hanson.

Broome has an Associate of Applied Science degree in Fire Protection Technology, a Bachelor of Science degree in Engineering Technology with a Concentration in Fire Safety from the University of North Carolina at Charlotte, and a Master of Public Administration degree with a concentration in Public Management from Appalachian State University. He is certified as a Fire Officer 111, has served as the department’s Public Information Officer and has extensive budget, hiring and recruitment experience.

In learning about the selection, Broome said, “I am honored to serve as the next Fire Chief for the City of Valdosta. I am grateful for the opportunity presented to me and the confidence expressed in me by Mr. Hanson.  I accept this tremendous responsibility, and I look forward to getting to work as your new chief.”

Broome is expected to officially assume his duties as Fire Chief on March 10.