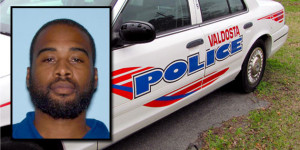 VALDOSTA, GA – The Valdosta Police Department has identified the suspect in the BB&T Bank robbery.

Eric Bernard Davis, African American male, 28 years of age, Valdosta resident, has been identified and is wanted for the bank robbery at BB&T Bank on Friday, February 14th. An arrest warrant for Robbery was signed against Davis yesterday after multiple tips were received from citizens who had identified him through the pictures sent to the media.

Detectives with the Valdosta Police Department followed up on the tips and positively identified Davis as the offender.  Davis has not been arrested yet, but authorities are actively looking for him.  If anyone sees him they are encouraged to call 911.

The Valdosta Police Department appreciates the assistance from the FBI and the citizens in helping us solve this case so quickly.