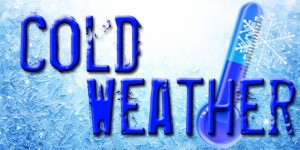 There have been no changes in the forecast this afternoon. Conditions are expected to worsen through the evening and night hours as the temperature continues to drop and ice continues to form. Road closures are not expected, maintenance crews are currently using salt and sand to address road issues.

Due to current weather conditions and the projected forecast, Lowndes County Government Offices closed for the day at 3:00 p.m. Transportation crews have begun to address issues with icing on the roadways in north Lowndes County. Citizens should proceed with caution as they leave work and are encouraged to stay off the roads until conditions improve.

In addition, Lowndes County Government Offices will not reopen until 10:00 a.m. in the morning.

Please exercise caution if travel is required over the next 24 hours. If you find yourself driving in icy conditions, please consider the following from the Georgia Department of Transportation:
* Stay off roads if travel is not necessary.
* Slow down to at least half your normal speed and use a low gear as you drive.
* Tap the brakes to avoid uncontrolled spins.
* Beware of black ice especially on bridges and overpasses.
* Watch out for over-confident and under-experienced drivers.

“Sleet has been reported at various locations throughout the county over the past few hours. In the northern portion of the County, particularly Hahira, we have received reports of accumulation of sleet and ice on roadways. Crews are out assessing bridges and have begun distributing salt and sand onto a couple of bridges that have begun to ice over. As you can see from the graphic below the forecast has continued to change and based on the current forecast we are not expected to see temperatures rise above freezing again until tomorrow morning. While snow is not as likely the forecast does call for sleet and freezing rain to continue throughout the afternoon. You can see that there is an above 80% chance of precipitation until about 6PM. The primary concern there is that any precipitation that falls will not likely dry up before the hard freeze sets in later tonight. If that does in fact occur, icy roads are almost a certainty tomorrow morning until the sun comes up and temperatures rise enough to allow thawing to occur.” -Ashley Tye, EMA Director

“Public works crews are currently checking bridges all over the county and making preparations to spread sand as needed on bridges, especially in the northern portion of the County where the greatest accumulation of ice and sleet has fallen so far. DOT has spread salt on the overpass at Exit 29 (Hahira) earlier today due to icing of that structure but it remains open. They are also monitoring bridges along state routes and are prepared to quickly address any icing issues but as of this time there are no other bridges showing signs of ice accumulations.” -EMA Director, Ashley Tye