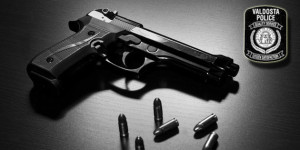 VALDOSTA, GA – A young woman is safe after she was robbed and kidnapped in Valdosta.

According to the Valdosta Police Department, 23 year old Charren Waller was getting into her car, at the 1700 block of N. Patterson Street, when a man with a gun approached her, and forced her to drive him to Florida. Authorities say 37 year old Calvin Williams, of Jacksonville, held Waller at gun point and forced her to drive him to Jacksonville. Fortunately for Waller, Williams kicked her out of the car in Jasper, Florida and continued to Jacksonville.

Williams is currently being held in Jacksonville on their charges. Arrest warrants have been signed by VPD. The charges pending against Williams are armed robbery, kidnapping, aggravated assault, and possession of a firearm during the commission of a crime.

On January 13, 2014 at approximately   9:30 am, the Valdosta Police Department was notified about an armed robbery and kidnapping that occurred in the 1700 block of N. Patterson Street at approximately 7:40 am.

The Hamilton County Sheriff’s Office in Jasper, Florida had made contact with Charen Waller who indicated that she was getting into her vehicle when an African American male, later identified as Calvin Williams approached Waller with a handgun and demanded she drive him to Florida.  He forced her into the vehicle and made her drive him to Jasper, Florida where he put Waller out of her vehicle and stole the vehicle.  Hamilton County Sheriffs Deputies made contact with Waller and the Valdosta Police Department was quickly notified.

A Detective from the Valdosta Police Department Person’s Crime Unit was sent to Hamilton County to interview Waller and begin the investigation. While he was interviewing the victim, her vehicle, which had been entered into the NCIC database and a BOLO issued, was located by Jacksonville Deputies who initiated a traffic stop.

Deputies detained Williams and recovered valuable evidence. Williams is currently being held by Jacksonville on their charges. Arrest warrants have already been signed in Valdosta for Armed Robbery, Kidnapping, Aggravated Assault, and Possession of a Firearm During the Commission of a Crime.  Further charges will be pending.

There were no reported injuries to the victim.

A quick response by the Hamilton County and Jacksonville, Florida law enforcement agencies resulted in an armed a dangerous person being apprehended.  We appreciate all the assistance that we received from them.