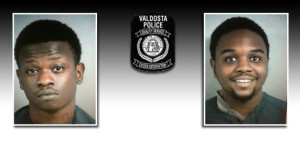 The three suspects were arrested for a theft of a four-wheeler from Valdosta Power Sports earlier, a theft from a vehicle which occurred at Family Dollar, and a robbery/kidnapping which occurred last Saturday at Kohl’s Department Store.

Officers Heather Turner and Stacy Brogdon, along with other Valdosta Police Officers, were on the lookout for the suspects from the Family Dollar vehicle break-in when they spotted Thomas, Gordon and the juvenile on a four-wheeler. The officers were aware of the stolen four-wheeler from a previous report early on Tuesday and the four wheeler the offenders were operating matched the same description of the stolen four-wheeler. Initially, they eluded officers but after persistence; the four wheeler and offenders were located and arrested.

Thomas was charged with theft by entering an automobile, theft by receiving stolen property and obstruction of a law enforcement officer.

Gordon was in possession of stolen items during a robbery/kidnapping incident which occurred last Saturday where a person was pulled to the ground and his cell phone and wallet was taken at Kohl’s Department Store. Gordon was charged with two counts of Theft by Receiving Stolen Property.

The 15 year old juvenile was charged with running a red light, obstruction of a law enforcement officer, theft by entering an automobile, and theft by receiving stolen property.

Additional charges will not be ruled out on the three offenders.