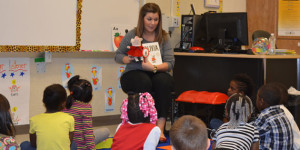 VALDOSTA, GA – On January 21, 2014, Valdosta City Schools added another Pre-K class at S. L. Mason Elementary. This is the first year S. L. Mason has been able to provide two new lottery funded Pre-K classes including transportation and meals to the children in the VCS district.
In the spring of 2013, the district applied for two new Pre-K classes. Based on an extensive waiting list, the district was awarded the first new class which opened at S. L. Mason in August 2013 and the second class was awarded in December 2013.

“Parents are very positive about the new Pre-K program,” stated Mrs. Dara Holt, the Curriculum Director for Pre-K-5th grade. “Preschool provides a foundation for learning both socially and academically that helps the children succeed in elementary school.”

This recently added Pre-K class benefits the community as a whole. It provides more children with the chance for early learning while exposing them to the school environment which better prepares them for a bright future. It also creates more availability for teaching jobs and essentially stimulates the economy.

The opening of this second Pre-K class allowed Miss Ashley Powell, a Valdosta State University graduate, to teach her first Pre-K class. All Pre-K classes also have a paraprofessional, Ms. Brooke Webb will assist Miss Powell in preparing the students for kindergarten. Most of the students in this class have had no exposure to a formal school environment. However, during story time they were all smiles. Miss Powell and Ms. Webb are eager to help these students excel at S.L. Mason.

This is only the beginning. Valdosta City Schools are continuing to apply for additional funding to increase the growth within all the elementary schools, so that all 4 year olds in our community have the opportunity to participate in preschool.

Registration for Pre-K classes for the 2014-2015 school year will be held in the month of April 2014 at all VCS elementary schools. During the month of May 2014 a lottery will be held and names will be drawn randomly from all registrations to fill existing Pre-K slots.

“Valdosta City Schools understands the importance and need for Pre-K classes and is encouraging the community to register and remain hopeful for our children’s future,” concluded Mrs. Holt.