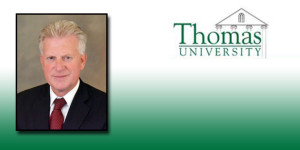 THOMASVILLE, GA – Thomas University was again in the national spotlight on Wednesday, Jan. 15, when President Gary Bonvillian served as one of the presenters in a national conference call presentation. The event was part of the College Access Affinity Group hosted by the U.S. Department of Education.

The presentation also featured Dr. Nancy Moody, president of Tusculm College in Greeneville, Tenn., and Dr. Gloria Nemerowicz, president of the Yes We Must Coalition. The conference call was moderated by De’Rell Bonner of the U.S. Department of Education Office of Communications and Outreach. Bonvillian was invited to participate by Greg Darnieder, Special Assistant for College Access at the U.S. Department of Education.

Thomas University and Tusculum College are both members of the Yes We Must Coalition, a group of 33 colleges and universities with enrollments of 5,000 or fewer in which the majority of undergraduate students are eligible for the federal Pell Grant. The group was formed in 2011 as an effort to share strategies for helping low-income, and especially first-generation college students, succeed. TU is a founding member of the organization. Bonvillian serves as its treasurer.

During the conference call, Nemerowicz opened by introducing the Yes We Must Coalition and explaining its mission. Then Moody and Bonvillian each shared information.

Bonvillian explained the importance of pre-college programs at TU, such as Educational Talent Search and JUMPSTART. He also discussed TU’s articulation agreements which allow for an easy transition for students who earn an associate degree at another school to move into a bachelor’s degree program at TU. He described TU’s dual enrollment programs that include Accel, Move on When Ready, and other programs that enable students to earn an associate degree while still in high school.

Bonvillian talked about TU’s early alert process, which provides interventions for students who are not performing well academically, and the academic renewal policy, which allows a former student who has not been enrolled for five years or more to return with a renewed GPA.

“Transformation is really at the heart of our mission,” Bonvillian said. “We do extraordinary things every day to help our students succeed.”

Through its involvement with the Yes We Must Coalition, TU is now able to share its strategies for student success with other colleges and universities as well as administrators at the U.S. Department of Education.

On April 2, 2012, Bonvillian was one of 12 presidents of private colleges and universities to meet with Arne Duncan, Secretary of Education, and other key White House staff members in Washington, D.C. That meeting was another effort of the Yes We Must Coalition.

“Thomas University, through its coalition involvement, continues to be an important player in trying to shape the future of higher education,” Bonvillian said.