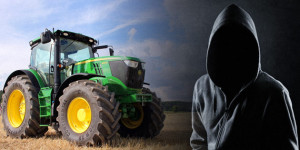 THOMASVILLE, GA – Thomas County Officials say that a man arrested in Florida is believed to have been part of a string of heavy equipment thefts in Thomasville, Cairo, and surrounding communities.

Darrel Earl Plank, 826 Grove Road, Brooksville Florida, is being held in the Hernando County Jail in Florida. Plank faces several charges of stealing John Deere and Kubota tractors in several small communities along I-75 in Georgia. Lt. Tim Watkins, of the Thomas County Sheriff’s Office, said Plank drove along I-75 and stole equipment from areas off the interstate, took the items to Hernando County, and then would alter the identification numbers and sell the equipment to a local pawn shop and on Craig’s List. Plank pawned and sold large tractors, riding lawn mowers, tools, farm equipment, and furniture.

It is suspected Plank stole equipment from Thomas County, Turner County, Colquitt County, Cairo, Cordele, Montezuma, and Lee County, Fla. Plank is being charged with stealing a backhoe from Sunset Memorial Gardens on U.S. 84 in Thomas County according to Watkins. A warrant has been issued in Thomas County charging Plank with felony theft by taking.

The U.S. Attorney has been asked to enter the case due to interference with interstate commerce.