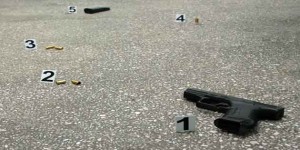 UPDATE  – Lowndes County Sheriff’s Office has reported that Jermaine Demps was the victim of the shooting on North Valdosta Road. Anthony Howell and Jacquil Sloan were with Demps yesterday afternoon when, according to police, he was shot for unknown reasons by an unknown person.

Lowndes County Sheriff Office is looking for the suspect in the shooting.  The suspect has been described as a black male, with shoulder length hair, and was driving a dark colored S.U.V similar to a Chevrolet Suburban, the exact make of the vehicle is unknown.

VALDOSTA, GA – One man was injured in a shooting Thursday afternoon outside of a business on North Valdosta Road.

According to witnesses, three men came into the store yelling that one of them was shot, and all three men then walked into the restroom. The three men then came back out of the restroom and one of the Flash Food employees tended to injured man’s gunshot wound. Witnesses say the men began telling them they were at the One Stop #1 convenience store when a SUV pulled up and “didn’t like the way we looked at them” and started shooting.

Paramedics arrived and took the gunshot victim to South Georgia Medical Center. Employees of the Flash Foods then began wondering why the men went into the bathroom together. An employee then went into the restroom and looked into the trash can. There she found a gun underneath the bag in the can, according to the Valdosta Daily Times. Investigators then physically searched the two men left at the scene.

As of Thursday evening, The Sheriff’s Office has not located any suspects or the SUV involved. They are continuing their investigation.