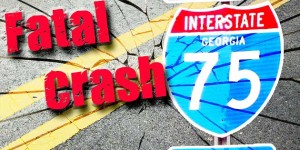 TIFTON, GA – Georgia State Patrol has confirmed one person is dead after a fatal Tuesday morning crash on Interstate 75 in Tifton.

Russel Poling, 54 years old of Orlando, was pronounced dead at Tift Regional Hospital after the crash near mile marker 64 on northbound I-75. GSP said Poling was driving a Toyota Prius. Other vehicles involved were a FedEx truck, driven by Rodney Benton, 53, of Morrow, and a GMC Envoy. The two in the Envoy, from Hernando, Florida, were Calvin Goeschel, 83, and Lorna Goeschel, 81. Calvin Goeschel was taken to Tift Regional Medical Center, and Lorna Goeschel was taken to a Macon hospital.

The Georgia State Patrol, Tifton Police, and Tift County Sheriff’s Office responded to the scene. GSP has taken over the investigation and said charges are pending.

Officials are still looking into how the crash happened.