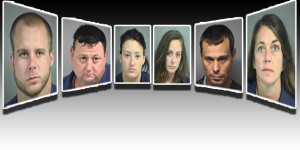 On Monday evening, The Sheriff’s Office stopped a vehicle after one of the occupants exited a business on Norman Drive with merchandise that she had failed to pay for. While speaking to Rachael Durgin the investigators discovered a quantity of Methamphetamine and other narcotics that are commonly used to make Methamphetamine. Also in the vehicle, the investigators found items that had been stolen in a burglary in Brooks County. Investigators from the Brooks County Sheriff’s Office were contacted and have began working local with investigators.

Information obtained from Rachael Durgin, 26, of St.Augustine Road, Valdosta, led to the discovery of additional stolen property on Tuesday from a residence on Porter Road in Lake Park. There investigators located a quantity of Methamphetamine, items used to manufacture Methamphetamine and firearms. Officers arrested Stony Gaskins, 41, of Williams Lanes, Valdosta and Judy Wetherington, 41, of Grover Hicks Road, Valdosta, after discovering the paraphernalia.