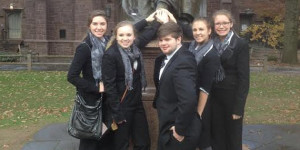 The team was made up of Savannah Pierce who won the Best Attorney award; Collier Mutert who won the Best Witness award; Kim Norton who received a perfect ten for her role as attorney in the case; Cason Green who was an attorney for the first time in this tournament and Hannah Poole who portrayed three separate witnesses.