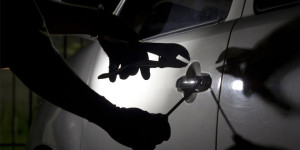 VALDOSTA, GA – On December 12, 2013 around 1:00 am, the Valdosta Police Department responded to The Gates Apartment complex in reference to a suspicious person who had been seen going through a vehicle in the parking lot. Officers arrived on scene and located Johnny Morrison who was positively identified by the witness. Contact was made with the owner of the vehicle who gave officers a description of the property taken, which was found on Morrison’s person. Morrison was arrested and taken to the Lowndes County Jail. He has been charged with Theft by Entering Auto.

Morrison had several other items in his possession and while checking other apartment complexes in the area, officers located a vehicle at 603 Baytree Road which had been entered. The owner of the vehicle was contacted and gave a description of the property taken, which was identified as some of the property Morrison had in his possession. Morrison was then charged with another count of Theft by Entering Auto for that incident.

The Valdosta Police Department would like to recognize the importance of having concerned citizens who report suspicious activity and also to recognize Patrol Officers Thomas Newton, Trey Gandy, and Chris Hicks, who exhibited excellent diligence and because of their quick response and efforts were able to clear two theft by entering auto cases by arrest.