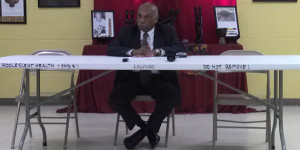 VALDOSTA, GA – On Thursday, October 31st, the Reverend Floyd Rose, president of Valdosta’s chapter of the Southern Christian Leadership Conference, was interviewed by Black Crow Media on the Kendrick Johnson case. Rose said he believes Johnson’s death was a tragic accident. “It is our candid opinion, based on all that we have seen,  the official stance is that this is a tragic accident, and Kendrick Johnson was not murdered,” said Rose. Rose feels the accusation of officials covering up a murder is just not true. He believes there are too many people who would have to be involved in the cover up. “(They) had to have conspired to cover up a murder that nobody has yet proven existed,” said Rose, “which means all of these people would risk their jobs, their reputations, their retirement, and risk going to prison.”

Rose says if this were the 1960’s there could be a believable reason for a cover up, but there are too many whistle blowers now. “Our official position is, while we don’t know what happened to him, we are convinced based on what we have seen, and all the open records we have looked at, he was a victim of a tragic accident,” said Rose. He said no one has come forth with any information for the$10,000 reward the SCLC put out on October 18th. Rose has told the Johnson family attorney, Chevene King, he would forward any information he received directly to King and to Michael Moore, the U.S. Attorney. “The father of the family did call me, and he was outraged that I would even bother to get involved in this now, or that I would offer a reward,” said Rose. He added that the community is hurting and is divided because they want closure along with the family.

Rose said he has asked Moore and the attorneys of the family to make a “definitive determination” in Johnson’s death. Rose believes the contradicting evidence found in the state’s investigation and the family’s pathologist’s investigation should encourage federal intervention into the case. “When that is done, I would hope that this would be over,” said Rose.

In closing, Rose said he is in search of the truth in the case. “Here’s what’s important to me as a man …  I am convinced that God wants me to look for the truth where ever the truth leads,” said Rose, “and truth has neither color nor creed, it knows neither race nor religion. The truth is the truth … in the end I would rather be with the truth than not be with the truth whatever that costs me now.”