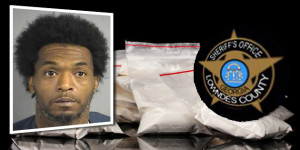 VALDOSTA, GA – On Monday afternoon investigators from the Sheriff’s Office conducted an undercover operation which lead to the arrest of Bruce Lee Hallman, 35, of St. Augustine Road, Valdosta, for possession of cocaine. The undercover law enforcement agents arranged a meeting with Hallman for the delivery of the cocaine. When Hallman was approached by investigators in his vehicle to make the transaction he began to drive away and a short chase ensued.

During the chase, a passenger with Hallman attempted to escape the vehicle, but they were unable to do so due to Hallman’s driving. The passenger then made several please with Hallman to stop, but he ignored. He was eventually stopped and placed under arrest by police.

Investigators seized approximately $400 worth of cocaine from Hallman. Hallman is facing charges of kidnapping, use of communications device in a drug transaction, obstruction of an officer, possession of cocaine, and fleeing and attempting to elude.

Sheriff Prine stated that this investigation is on-going and is asking that anyone with information on this case, or any other case may contact the Lowndes County Sheriff’s Office at {229} 671-2950 or anonymous tips can be provided at {229} 671-2985 or on line at www.lowndessheriff.com.