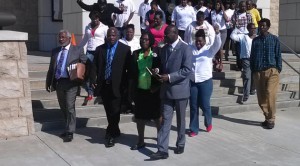 VALDOSTA, GA – On Wednesday, October 30th, Chevene King and Benjamin Crump, attorneys of the Kendrick Johnson family, held a hearing with the attorneys of the Lowndes County Sheriff’s Department and the attorney’s for the school system on releasing the video tapes of the Lowndes High School gymnasium and the surrounding area of the gymnasium. Attorney King told the press they have been granted access to these video tapes and all other investigative files. King stated they should receive the tapes by the end of the day.

Both attorney King and Crump believe they have made significant progress in the case today. Attorney King feels the videos will not show when Kendrick was placed into the mats. “We don’t anticipate we will see Kendrick entering the mats. It has been indicated by the Chief Medical Examiner that GBI agents have looked at the tapes, and it did not show Kendrick going into the mats,”said King, “…we don’t believe that we will see from any of these videos anything that corroborates or supports what the Sheriff has theorized has happened.” When asked if King felt the videos may have been tampered with he claimed it is difficult at this point to answer the question until he has viewed the videos.

Crump stated he does not see any federal intervention unless the coroner’s inquest is not granted to the family. “If this death certificate is not changed to where we can get a proper investigation into the death of Kendrick Johnson, then that is exactly what warrants federal intervention,” said Crump. Until the manner and cause of death on Kendrick Johnson’s death certificate  is changed the investigation will remain closed. When asked why Crump felt the school board had been so uncooperative with the video earlier in the case he stated, “I just want to say  this here, and we will talk about that because I think we all worked in a cooperative effort today to get the videos released.”

The hearing took over two hours to finally come to a conclusion in favor of the Johnson family. King stated the main concern for the Sheriff’s Department and school board’s attorneys is the false prosecution of minors who are in the videos, but have nothing to do with the incident with Kendrick Johnson. King said there was discussion on the identities of those seen in the video, and the scrutiny they may face. “We assured the judge that we were not engaged in anything other than an investigation into the truth to what happened to Kendrick Johnson,” said King. Crump believes the video will give the family a building block to begin understanding what happened to Kendrick Johnson in January . “We will see enough to get us on first base so we can kinda figure out who went into that gym,” said Crump,”…is what we hope to see, it is what we anticipate to see.”

The King and Crump will  hear on Monday if the coroner’s inquest they have filed for has been approved by the judge. “Today was win, not just for the Johnson family, not just for the attorneys who are up there fighting vigorously for them to get to this point,” said Crump, “but it was a win for the community and everybody who really wants this murder mystery to be solved. We’re getting one step closer, and today represented a victory for the truth.”