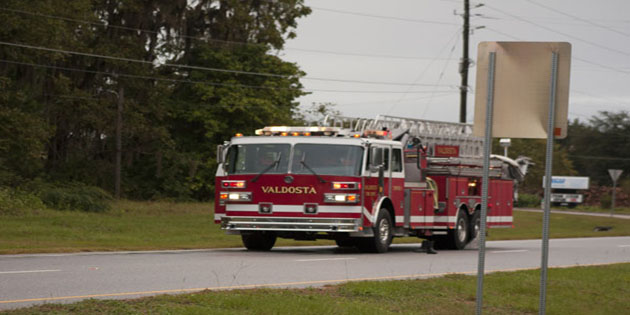 “J.D. has taken the Valdosta Fire Department to unprecedented heights,” said Valdosta Mayor John Gayle. “Much of the department’s success can be attributed to his leadership and dedication. On behalf of the City of Valdosta and its citizens, we thank him for his outstanding service and dedication and wish him much happiness in retirement.”

Under Chief Rice’s leadership, and with strong mayor and council support, the city’s Insurance Services Office (ISO) rating improved from Class 3 to Class 2, which saves homeowners and businesses money on their insurance premiums. The outstanding ISO rating is also a strong statement about the quality of fire protection in the City of Valdosta. Of the nearly 700 cities and counties in Georgia, only one of them has an ISO rating better than Valdosta and only nine other communities share the same ISO Class 2 rating.

To maintain the exceptional mission of the VFD, several stations were built or renovated under Chief Rice’s supervision: a new Station 1, new Station 2, new Station 6, and the renovations of Station 3 and Station 4. A new Station 7 is under construction with the collaboration of the Valdosta-Lowndes County Airport Authority and the Federal Aviation Administration. Chief Rice has provided the leadership to facilitate the purchase and replacement of the department’s fleet of safety vehicles, including the vision to purchase aerial trucks capable of reaching 10 stories, which has allowed for the multi-level development projects in our city. He was also instrumental in the innovative arrangement of the South Georgia EMS housing an ambulance at Station 6, creating efficiency and improved response time for ambulance service in this highly developed area of our city.

The VFD became the first fire department in Georgia to have 100 percent of firefighters Hazmat certified. The recent chemical fire confirmed the importance of such training and certification and allowed the VFD firefighters to safely perform their duties with precision and expertise.

Chief Rice was also responsible for hiring the city’s first female firefighters and promoting females to positions of rank, as part of creating a diverse department.

In 2006, the VFD was selected by the state to be the home a Georgia Search and Rescue (GSAR) Team—one of only four at the time—which provided $1.1 million for the purchase of a GSAR vehicle and rescue equipment. The GSAR team has been activated on numerous occasions to respond to disasters throughout the state and region, further demonstrating the reputation of the VFD. VFD members have assisted in the rescue efforts of the 9-11 World Trade Center disaster, responded to reported Anthrax alerts, provided recovery relief after Hurricane Katrina, assisted with the public safety efforts of protecting the World-Wide Leaders attending the G-8 Summit on Saint Simons Island, Ga., participated in rescue efforts for workers in adjacent communities and were the first mutual aid called to assist with the forest fires in Ware County.

Chief Rice has served as the president of the Georgia Fire Chiefs and Firefighters Association, has served in various roles on regional boards, national boards, and is currently the President of the National Black Fire Chiefs Association. Over the years, he has also been routinely asked to serve on panels to select Fire Chiefs and to serve in other positions of rank for task force committees both inside and outside the state of Georgia.

“J.D. has not only been a great Fire Chief, but he is a great friend and a great team player,” said City Manager Larry Hanson. “He will be sorely missed as he enters this next phase of his life. He has felt a calling to teach, and I commend him for his continued commitment to making a difference in the lives of our young people.”

Chief Rice was born and raised in Douglas, Georgia, and graduated from the Coffee County High School. After graduating high school, he served honorably in the U.S. Army. His firefighting career began in 1978 as a firefighter with the Pittsfield Township Fire Department in Michigan, where he also attended the University of Michigan, majoring in Political Science. Chief Rice later transferred to the Waycross Fire Department in Georgia and rose through the ranks to become the Fire Marshal in 1986. In 1992, Chief Rice accepted the position of Assistant Fire Chief for the City of Valdosta. Three years later, he was hired by Valdosta City Manager Larry Hanson—then Interim City Manager—as the new Valdosta Fire Chief.

Upon his retirement, Chief Rice will seek his teaching certification and will continue his involvement as a coach at the Southside Recreation Center and as the commander of the American Veterans Post #607.

“I feel so blessed and fortunate to have worked for the City of Valdosta and to lead the incredible and talented VFD staff for the past 18 years,” said Chief Rice. “I have always had the desire to teach U.S. History, and I look forward to continuing to serve Valdosta through the retirement phase of my life.”

The chief’s early announcement allows the city adequate time to find his replacement. The City of Valdosta will conduct a professional search for the most qualified candidate to continue the success and legacy of the Valdosta Fire Department.