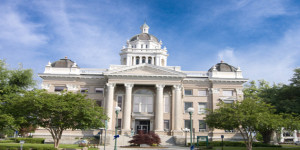 Valdosta, GA-
A protest and demonstration at the Lowndes County Judicial Center ended with 7 arrests on Thursday afternoon, including the father and mother of 17-year old Kendrick Johnson.

Witnesses said the demonstrators inside formed a ‘human chain’ and refused to let anyone into the judicial chambers itself. Lydia Whitlock, Barbara Jones, Keisha Moore, Anastasia Roe, and Tesha Marshall were also arrested. All seven were charged with misdemeanor interference of government property.

The group apparently had called the Lowndes County Sheriff’s Office prior to today’s events to give the sheriff’s office advance warning that such a demonstration would take place.

Video of the arrests inside the courthouse can be found here.