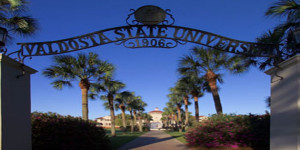 VALDOSTA — Valdosta State University will host its second annual Dancing with the Stars of Valdosta on Saturday, April 13, in the Student Union’s Grand Ballroom. The fun will begin with a social hour at 6 p.m., followed by dinner at 7 p.m.

Eight couples — one local “star” paired with one local “expert” — will dance for the Audience Favorite Award while simultaneously having fun and raising much-needed funds for music, theatre, and dance scholarships. They were each allowed to choose their own dance style, theme, costumes, music; they rehearsed for weeks wherever and whenever they could.

Eric Nielsen, choreographer, shared, “Last year’s event was so successful that people were phoning in the day after the event not only wanting to know the date for next year’s benefit but wanting to put in a bid for participating.”

The inaugural Dancing with the Stars of Valdosta raised about $30,000 total, Nielsen added. After expenses, the Department of Music and Department of Communication Arts’ Theatre and Dance program each received $12,000 for student scholarships.

Jacque Wheeler, professor, and Duke Guthrie, associate professor, of the university’s Theatre area, will serve as emcees. University System of Georgia Chancellor Hank M. Huckaby will be in the audience.

Dancing with the Stars of Valdosta will kick off with a Parade of Stars from the 2012 event. The competition will begin with a group Cha-Cha choreographed by Nielsen.

Dancing with the Stars of Valdosta is primarily coordinated by David Johnson of the Department of Music, representing the Music Scholarship Board, with support from Theatre and Dance’s Golden Circle Scholarship and Support Fund Board.

Note: Tickets are sold out.