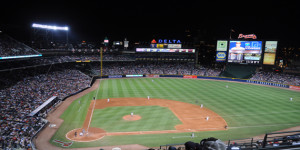 When GM Frank Wren acquired starter Paul Maholm from the Cubs last July, he was meant to anchor the back end of the Braves’ rotation. Someone forgot to tell the left-hander that he wasn’t supposed to pitch like the staff ace. After 7.2 IP of shutout ball on Sunday, Maholm has yet to give up an earned run in three starts this year.

Maholm received plenty of run support, getting a 3-run cushion before even taking the mound on Sunday. A first-inning double by rookie Evan Gattis and a 2-run single from Chris Johnson opened up the scoring, and the floodgates opened just two innings later.

Justin Upton hit his 7th HR of the season, and Andrelton Simmons added a three-run shot to make it 7-0 in the 3rd inning. That would be plenty for Maholm and the Braves’ bullpen, who held Washington to just four hits.

Next up: Tuesday vs. Kansas City at Turner Field, 7:10pm