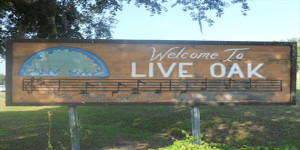 A Live Oak man is behind bars after admitting to Suwannee County Sheriff’s deputies that he stabbed his mother to death following an argument. 44-year old Kenneth Hooker told deputies he stabbed the woman because he ‘just wanted her to listen to him.’

Rose Lawson died from a single stab wound to the chest. Although Hooker failed to call 911 after the incident, it remains unclear if emergency responders could have saved the woman. He is now charged with second degree murder.